The latest project that I'm now working on has the unlikely title of "Christmas on Mars". This Evergreen Federal Bank sponsored event in Grants Pass, OR is the latest brainchild of Brady Adams. The back-story goes something like this:

Unknown to most people Santa has not only been delivering toys to the boys and girls on Earth, but also to the children of Mars. When Evergreen Bank tore down the old Riverside Hotel in order to build Riverside Park they accidentally damaged Santa's toy delivery system to Mars. In order to make things right with Santa, Brady agreed to build a rocket ship to ensure that toys continued to reach Mars by Christmas morning. Are you still with me?

So that's where a bunch of artists (including me) come in. We're now building a huge rocket ship, Martian toy store, and a whole bunch of Martians to run the place. You literally can't make this stuff up. Well I guess you can, but no one would take you seriously. So here's the proof in pictures... 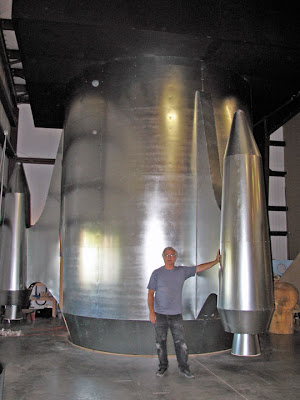 This is Del Hearn posing with his huge rocket ship creation. Several artists are now building the interior, complete with Martians astronaughts. 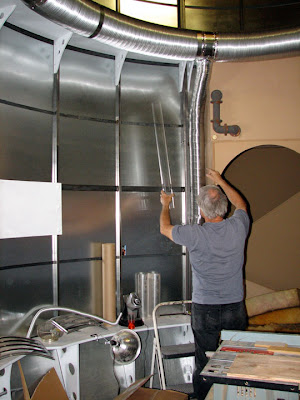 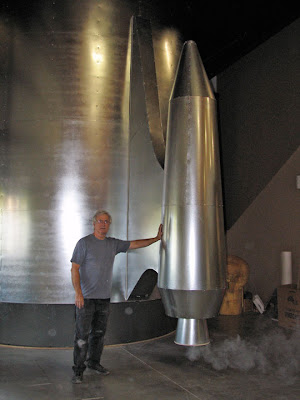 An early test to make sure the engines are working properly. These huge rockets will have their own lighting and sound system! 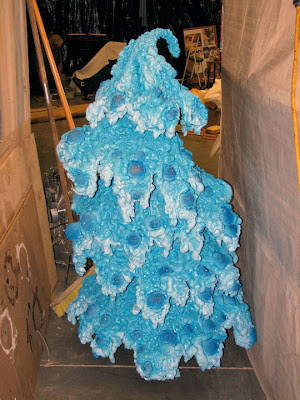 A Martian Christmas tree. Kind of a cross between Dr. Suess and Tim Burton. 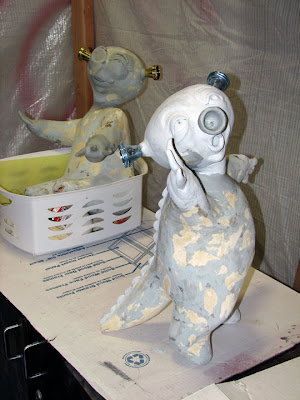 Some of Janet Higgen's Martians in progress. 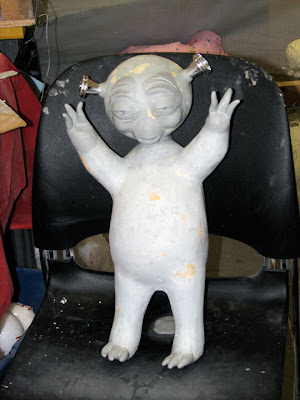 I love this time of year. The weather is mercifully cooler, the trees are exploding with fall color, Halloween is coming, and of course there are pumpkins. There's something therapeutic about pumpkins. They're a cheery orange, they have an organic, earthy appeal, and no two are alike. What's not to like. As those who know me can attest I especially enjoy carving these gargantuan gourds.

This year I'm up to my elbows in pumpkins as I try to meet my obligations to clients. So far I've carved out about ten big pumpkins, and I have a few more to go. I use a surface carving technique where I cut my designs through just the skin of the pumpkin. I don't bother cutting open and scooping out the guts. After carving and painting I use a sealant to preserve my pumpkins, giving them a respectable shelf life. Last year one of my clients kept their pumpkin on display until May! They typically last until Christmas or so.

Here are some of this year's crop 'O carved pumpkins: 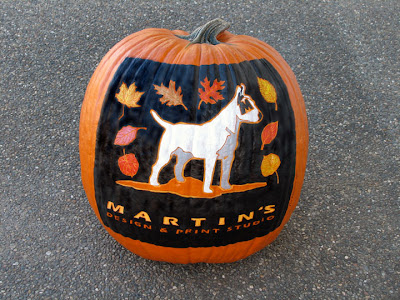 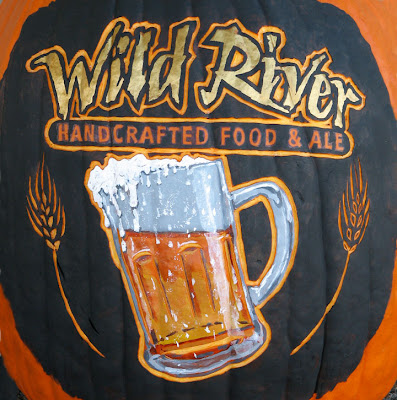 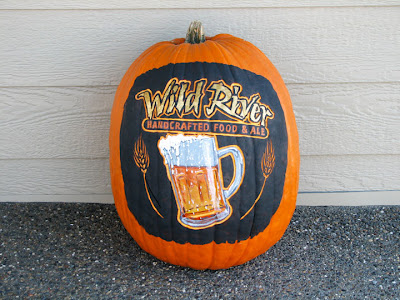 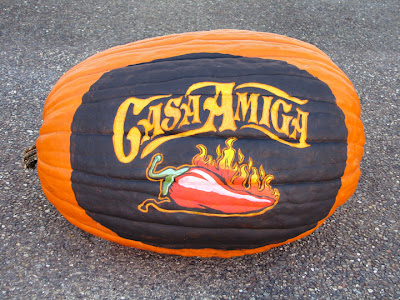 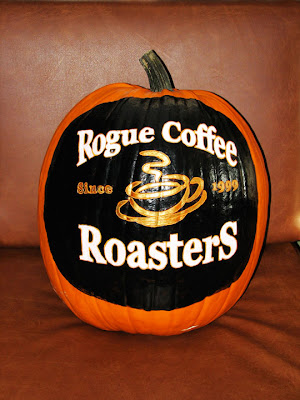 In all the years that I lived in the general vicinity I never set foot in Prospect Park (except the Brooklyn Bontanical Garden once years ago and that's a seperate fee area so I don't count it.) Prospect Park was designed by Frederick Law Olmstead, the same designer of Central Park. The park is 585 acres. Here are the things I learned about Prospect Park today in the 3 hours I wandered around:

The squirrels here are very shy. I thought this fella was going to rip the camera out of my hands. You never know what's edible when you're a rodent, I suppose. 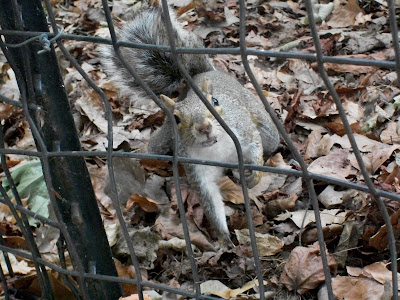 You need to look up when in a city, even if you know you will be branded tourist. You'll miss much by only looking from pigeon strut to traffic light level. I wandered through the Chinese Pavillion and in the middle, up high, hiding in the peak, was this beauty: 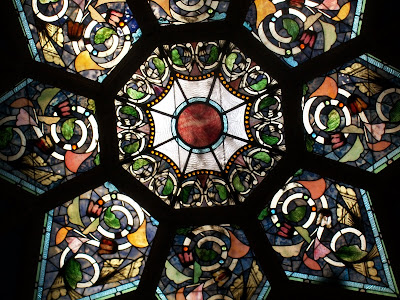 I caught my breath when I saw this stained glass. It's in really good shape. I understand that the pavillion building is around 100 years old, so I was surprised at the condition of this window.
Harry has a wall. I never knew.... 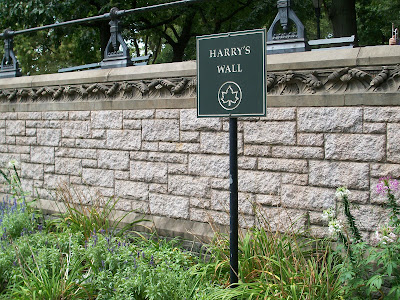 Some of the best advice I've seen to date: 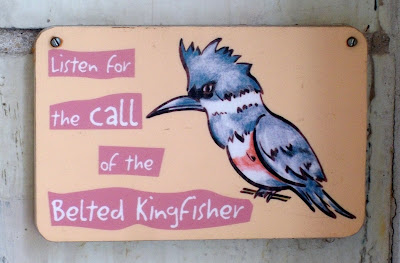 I think we all need to heed this advice. Keep this in mind next time you're outside.
Posted by Monkey Mind at 11:36 AM 3 comments: 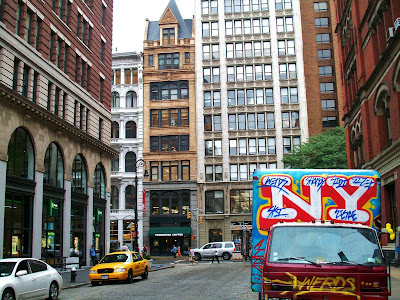 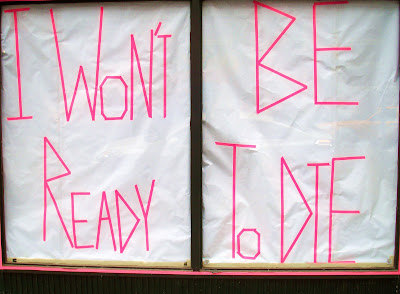 I had to travel all the way to NY to find this message.
Posted by Monkey Mind at 5:34 PM 2 comments:

We stopped at this intriguing art gallery in Crescent City, CA. Unfortunately the artist wasn't there and the shop was closed so I didn't get his name or any further information. I would like to go back and do some shopping - I need some things for around the home: 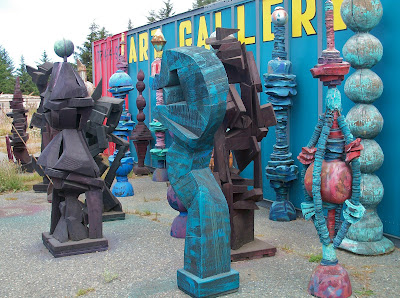 This would look great in the garden: 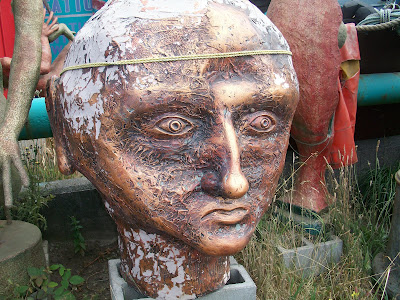 I need a new lounge chair for the living room (looks comfy, doesn't it?): 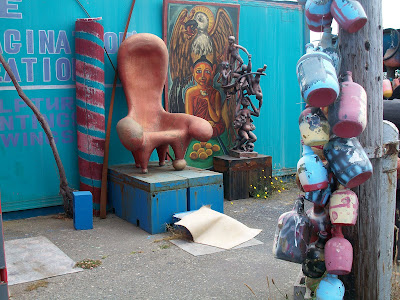 And I sure would love to have a new desk: 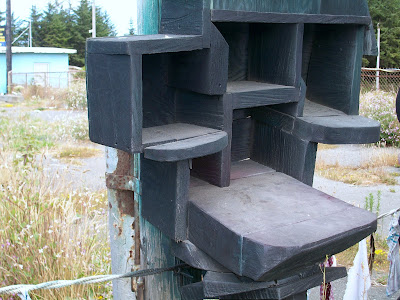 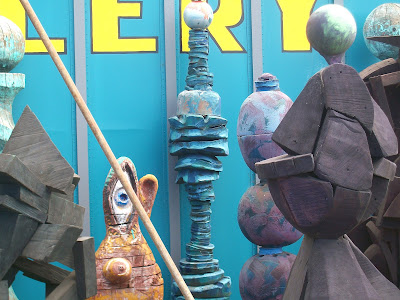 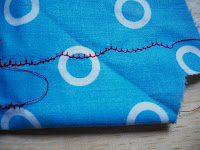 The good news is....the sewing machine works. It sews so neatly and quietly -I love it! It monograms and has a double-needle sewing feature and all these groovy stitch patterns that my cheapy hobby sewing machine does not. I'm missing some kind of ring that holds the thread in place and I think there were a couple more feet for it but I can use it as it is now and, for 5 bucks, I will not complain. I can order all the accessories online.
I'm scribbling along in my Drawing Lab class sponsored by ART. There are 5-7 labs to complete each week and they vary in style so widely; I find many that I love working on and some I have to struggle through a bit. It's been an enlightening process. I've discovered that I don't do as well with drawing purely from imagination: 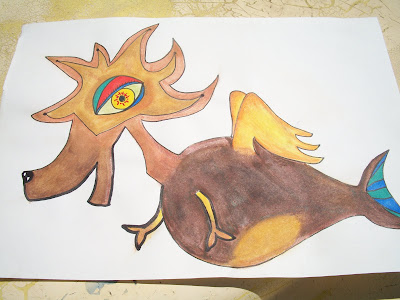 This lab was called One-Eyed Monsters. You draw an eye and then create a creature for that eye. It was fun but my monster lacks animation or character. I drew another that ended up looking like a peacock: 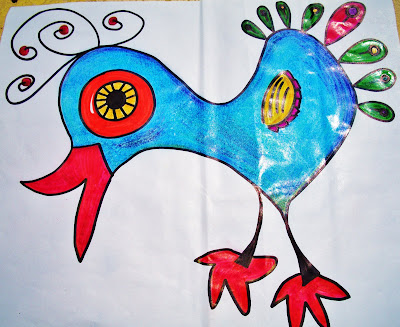 Monster indeed.
I really like drawing anything that involves drawing objects in dimension. This was a lab about drawing a toy: 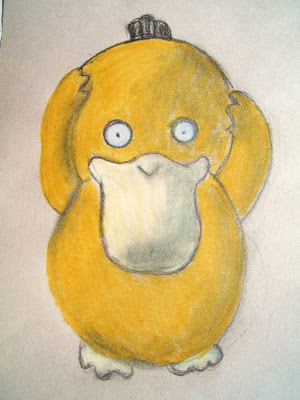 I enjoyed working on the shading. Shadows have always been difficult for me but, since I started this workshop I'm noticing more how light falls on people and sculpts faces. I want to learn to draw with less line and more depth.

Someday I will tackle perspective. Once I get to using perspective in sketching (it's unavoidable really, if you want to understand drawing) that's when I throw in the towel and stop drawing for years. I hope to pass that hurdle this time around.
Posted by Monkey Mind at 10:04 AM 2 comments:

Welcome to thrift share Monday. Please share your weekend thrifty stories with us at Apron Thrift Girl. I was busy all weekend so I didn't hit the sales until Sunday morning. I found 2 nice hoodies for a buck a piece. The gray one is 80% lambswool from Great Northwest. I thought I would use it for felting but after a thorough scan I realized it was in like new condition and it fit me. I'll have to wear it out before I can use it for craft projects. 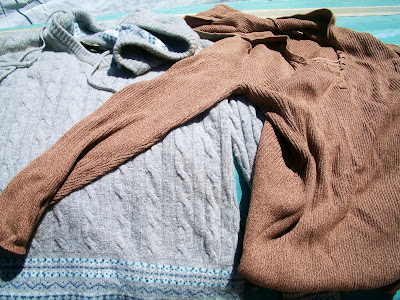 The brown shirt is cotton from Shaver Lake. Looks like it has never been worn. It seems a tiny bit too small for me but really, I'm going to lose those extra 15lbs any day now and then it will fit just fine.

Here's the score of the weekend: 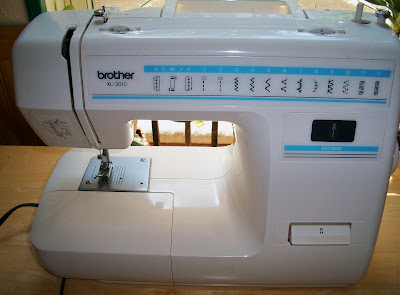 A Brother XL3010. This is an older machine but it has excellent reviews and I've seen used ones on sale online for $100. This one is great condition, although it is missing a couple of the accessories. The seller said that it needed a tune up and it would be good to go but I'm not sure it even needs a tune up. The motor purrs along and all the pieces seem to move smoothly, so I'm hopeful it will work. I'm going to fiddle with it tomorrow and actually try to sew something. The best part? I paid $5 for it. I couldn't leave it there at that price.

I hope you all had an incredible thrifty weekend!